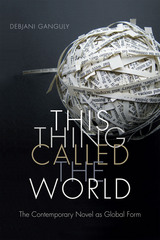 In This Thing Called the World Debjani Ganguly theorizes the contemporary global novel and the social and historical conditions that shaped it. Ganguly contends that global literature coalesced into its current form in 1989, an event marked by the convergence of three major trends: the consolidation of the information age, the arrival of a perpetual state of global war, and the expanding focus on humanitarianism. Ganguly analyzes a trove of novels from authors including Salman Rushdie, Don DeLillo, Michael Ondaatje, and Art Spiegelman, who address wars in Iraq, Afghanistan, and Sri Lanka, the Palestinian and Kashmiri crises, the Rwandan genocide, and post9/11 terrorism. These novels exist in a context in which suffering's presence in everyday life is mediated through digital images and where authors integrate visual forms into their storytelling. In showing how the evolution of the contemporary global novel is analogous to the European novel’s emergence in the eighteenth century, when society and the development of capitalism faced similar monumental ruptures, Ganguly provides both a theory of the contemporary moment and a reminder of the novel's power.
AUTHOR BIOGRAPHY
Debjani Ganguly is Professor of English and Director of the Institute of the Humanities and Global Cultures at the University of Virginia. She is the author of Caste and Dalit Lifeworlds: Postcolonial Perspectives.
REVIEWS
-- K. Tölölyan Choice


-- Christopher McVey Studies in the Novel

1. Real Virtualities and the Undead Genre  39

4. From Midnight's Child to Clown Assassin  110

6. The Sky Is Falling: The Narrative Screen of Terror  157

8. Forensic Witnessing: The (Non)Evidence of Bones  192