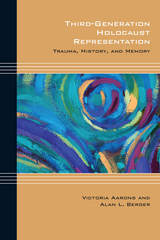 Victoria Aarons and Alan L. Berger show that Holocaust literary representation has continued to flourish well into the twenty-first century—gaining increased momentum even as its perspective shifts, as a third generation adds its voice to the chorus of post-Holocaust writers. In negotiating the complex thematic imperatives and narrative conceits of the literature of third-generation writers, this bold new work examines those structures, tropes, patterns, ironies, disjunctions, and overall tensions that produce a literature that laments unrecoverable loss for a generation removed spatially and temporally from the extended trauma of the Holocaust. Aarons and Berger address evolving notions of “postmemory”; the intergenerational and ongoing transmission of trauma; issues of Jewish cultural identity; inherited memory; the psychological tensions of post-Holocaust Jewish identity; the characteristic tropes of memory and the personalized narrative voice; issues of generational dislocation and anxiety; the recurrent antagonisms of assimilation and historical alienation; the imaginative re-creation and reconstruction of the past; and the future of Holocaust memory and representation.
AUTHOR BIOGRAPHY
VICTORIA AARONS is O. R. and Eva Mitchell Distinguished Professor of Literature and chair of the English Department at Trinity University.
ALAN L. BERGER holds the Raddock Family Eminent Scholar Chair for Holocaust Studies and is a professor of Judaic studies at Florida Atlantic University.
REVIEWS
"The authors address a number of questions: How are those of the third generation affected by the memories they have inherited? How can they present a world that existed in the past, one they never experienced? To what extent is the new generation of Holocaust writers struck by this tragic past? Are these questions relevant to issues such as present-day assimilation attempts? Aarons and Berger offer a convincing and deeply moving analysis of these and a number of other questions. These third-generation texts provide deep insight into a world the authors never saw or experienced and offer new ways of giving a voice to those who were brutally murdered in the Holocaust. Recommended." —CHOICE
— -


Acknowledgments
Chapter 1
On the Periphery: The “Tangled Roots” of Holocaust Remembrance for the Third Generation
Chapter 2
The Intergenerational Transmission of Memory and Trauma: From Survivor Writing to Post-Holocaust Representation
Chapter 3
Third-Generation Memoirs: Metonymy and Representation in Daniel Mendelsohn’s The Lost
Chapter 4
Trauma and Tradition: Changing Classical Paradigms in Third-Generation Novelists
Chapter 5
Nicole Krauss: Inheriting the Burden of Holocaust Trauma
Chapter 6
Refugee Writers and Holocaust Trauma
Chapter 7
“There were times when it was possible to weigh suffering”: Julie Orringer’s The Invisible Bridge and the Extended Trauma of the Holocaust
Notes
Bibliography
Index