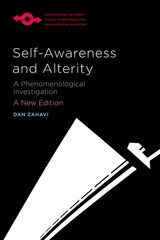 In the rigorous and highly original Self-Awareness and Alterity, Dan Zahavi provides a sustained argument that phenomenology, especially in its Husserlian version, can make a decisive contribution to discussions of self-awareness. Engaging with debates within both analytic philosophy (Elizabeth Anscombe, John Perry, Sydney Shoemaker, Héctor-Neri Castañeda, David Rosenthal) and contemporary German philosophy (Dieter Henrich, Manfred Frank, Ernst Tugendhat), Zahavi argues that the phenomenological tradition has much more to offer when it comes to the problem of self-awareness than is normally assumed.

As a contribution to the current philosophical debate concerning self-awareness, the book presents a comprehensive reconstruction of Husserl’s theory of pre-reflective self-awareness, thereby criticizing a number of prevalent interpretations. In addition, Zahavi also offers a systematic discussion of a number of phenomenological insights related to the issue of self-awareness, including analyses of the temporal, intentional, reflexive, bodily, and social nature of the self.

The new edition of this prize-winning book has been updated and revised, and all quotations have been translated into English. It also contains a new preface in which Zahavi traces the developments of the debates around self-awareness over the last twenty years and situates this book in the context of his subsequent work.
AUTHOR BIOGRAPHY
DAN ZAHAVI is a professor of philosophy and the director of the Center for Subjectivity Research at the University of Copenhagen and a professor of philosophy at the University of Oxford. He is the author of many books, including Husserl’s Phenomenology, Subjectivity and Selfhood: Investigating the First-Person Perspective, Self and Other: Exploring Subjectivity, Empathy, and Shame, Husserl’s Legacy: Phenomenology, Metaphysics, and Transcendental Philosophy, and Phenomenology: The Basics.
TABLE OF CONTENTS
Contents
Acknowledgments
Preface to the New Edition
Introduction
Part I. Preliminary Reflections
1. “I”
2. Reflective versus Pre-Reflective Self-Awareness
3. Some Essential Questions
Part II. The Self-Manifestation of Subjectivity
4. Some Initial Distinctions
5. The Temporality of Self-Awareness
6. The Lived Body
7. Self-Affection and Hetero-Affection
8. Different Levels of Egocentricity
9. The Person, the Body, and the Other
10. Self-Manifestation and Self-Comprehension
11. Self-Awareness and Alterity: A Conclusion
Appendix: Self-Awareness and the Unconscious
Notes
Works Cited
Index
REQUEST ACCESSIBLE FILE