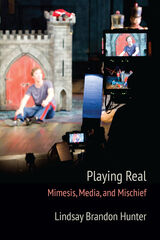 Playing Real: Mimesis, Media, and Mischief explores the integration and interaction of mimetic theatricality and representational media in twentieth- and twenty-first-century performance. It brings together carefully chosen sites of performance—including live broadcasts of theatrical productions, reality television, and alternate-reality gaming—in which mediatization and mimesis compete and collude to represent the real to audiences. Lindsay Brandon Hunter reads such performances as forcing confrontation between notions of authenticity, sincerity, and spontaneity and their various others: the fake, the feigned, the staged, or the rehearsed.

Each site examined in Playing Real purports to show audiences something real—real theater, real housewives, real alternative scenarios—which is simultaneously visible as overtly constructed, adulterated by artifice and artificiality. The integration of mediatization and theatricality in these performances, Hunter argues, exploits the proclivities of both to conjure the real even as they risk corrupting the perception of authenticity by imbricating it with artifice and overt manipulation.

Although the performances analyzed obscure boundaries separating actual from virtual, genuine from artificial, and truth from fiction, Hunter rejects the notion that these productions imperil the “real.” She insists on uncertainty as a fertile site for productive and pleasurable mischief—including relationships to realness and authenticity among both audience and participants.

LINDSAY BRANDON HUNTER teaches in the Department of Theatre and Dance at the University at Buffalo, SUNY.


Acknowledgments
Introduction
1. The Miracle of Electronovision: Mediatizing the Live Stage/Enlivening the Screen
2. Mimetic Strategies: The Work of the Actor in the Midst of Technological Reproduction
3. Intimate Access: Performing Romantic Love on Reality TV
4. "Scripted Reality" and the Negotiation of Authenticity
5. This Is Not a Game: Playing Alternate Realities in ARGs
6. This Is Not a Threat: Conspiracy for Good
Conclusion
Notes
Bibliography
Index