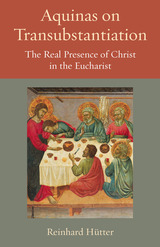 Aquinas on Transubstantiation treats one of the most frequently mis-understood and mis-represented teachings of Thomas Aquinas—Eucharistic transubstantiation. The study interprets Aquinas’s teaching as an exercise of “holy teaching” (sacra doctrina) that intends to show theologically and back up philosophically the simple yet profound thesis that “transubstantiation” affirms nothing but the truth of Christ’s words at the Last Supper—“This is my body,” “This is my blood.” Yet in order to achieve a contemporary ressourcement of this simple yet profound truth, it is necessary to probe the depths of Thomas Aquinas’s philosophical interpretation of it. For Thomas Aquinas, in regarding the truth of Eucharistic conversion, it is faith that preserves the human intellect from missing or dismissing the mystery announced in Christ’s words. Faith, however, is not intellectually blind, a faith that, as is often erroneously held, is commanded by arbitrary divine dictates to which the will submits in blind obedience. Rather, Aquinas takes faith is sustained, but not constituted, by an intellectual contemplation of the proposed mystery of faith, by faith seeking understanding. Thomas Aquinas unfolds this exercise of understanding guided by faith in the medium of a metaphysical contemplation that affords a profound intellectual appreciation of this central mystery of faith—precisely as mystery. Thomas’s metaphysical contemplation of Eucharistic conversion gestures toward the blinding light of superintelligibility, experienced as the unique darkness that surrounds this sublime mystery of faith. A ressourcement in Thomas Aquinas’s doctrine of transubstantiation also affords an renewed appreciation of the Church’s affirmation of transubstantiation as the most apt term for the interpretation of the mystery of Eucharistic conversion and a greater precision of what is centrally at stake in this mystery in the ongoing ecumenical conversation of this most central Christian teaching. A doctrinally sound, ecumenically informed, and philosophically reflected contemporary Catholic theology cannot afford to ignore or dismiss Aquinas’s surpassing account of Eucharistic conversion.
TABLE OF CONTENTS
Contents
Preface
Abbreviations
Introduction
1. Mysterium Fidei: The Mystery of Faith Proposed in Sacred Scripture
2. Dogma datur Christianis: The Truth Is Given to Christians by Tradition and the Magisterium
3. Eucharistic Conversion and the Categories “Substance” and “Quantity”
4. “This Is My Body”: Faith Preserves the Intellect from Deception
5. “You Are My Friends”: Christ’s Eucharistic Presence, Central Token of Christ’s Surpassing Friendship
Appendixes
Endnotes
Selected Bibliography
Index of Names
General Index