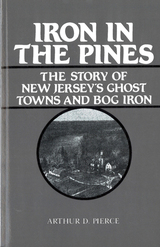 Iron in the Pines
by Arthur Pierce
Rutgers University Press, 1984
Paper: 978-0-8135-0514-5
Deep in the heart of southern New Jersey lies an area of some 96,000 acres of sprawling wilderness. It is the famous Wharton Tract which the state of New Jersey purchased in 1954 for a watershed, game preserve, and park. Many people know and love these wooded acres. Each year, people by the thousands visit Batsto Village, once the center of the iron industry that thrived on the tract more than a century ago.

With warmth and accuracy, Arthur D. Pierce tells the story of the years when iron was king, and around it rose a rustic feudal economy. There were glass factories, paper mills, cotton mills, and brickmaking establishments. Here, too, were men who made those years exciting: Benedict Arnold and his first step toward treason; Chrales Read, who dreamed of an empire and died in exile; Revolutionary heroes and heroines, privateers, and rogues. The author's vivid pictures of day-to-day life in the old iron communities are based upon careful research. This book proves that the human drama of documented history belies any notion that fiction is stranger than truth.