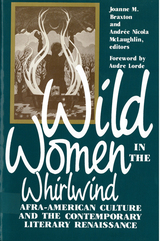 "The cultural and literary achievements of black American women are examined and celebrated in some 20 enjoyable, erudite essays by prominent scholars, critics, and activists."
--Publishers Weekly

This book is the first comprehensive collection of critical and theoretical essays to explore the literary and multi-cultural traditions of Black American women in many genres over a broad span of time. The essays explore cultural and literary experience in a wide context and offer a variety of critical theoretical constructs in which to view that experience. The editors have written excellent introductions providing both historical and comparative discussions of the contemporary literary renaissance. The book also includes a valuable bibliography of selected English-language works by Black women in the Americas from the 1970s to the present.