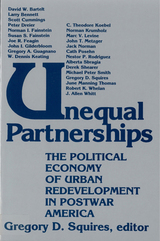 Unequal Partnerships explores urban development in American cities since World War II. Gregory D. Squires and other contributors examine what has long been a highly inequitable and destructive process of urban development. They look at the political and social assumptions and interests shaping redevelopment, the social and economic costs of development for the vast majority of urban residents, and alternative approaches emerging.The book begins with an overview of the ideological forces that have shaped urban economic development in the United States from the urban renewal days of the 1950s and 1960s through the celebration of public-private partnerships in the 1980s. Subsequent chapters examine specific cities in light of the consequences of development initiatives. These cities include those in declining rustbelt regions that are struggling with the consequences of deindustrialization (Boston, New York, Philadelphia, Pittsburgh, Cleveland, Detroit, Chicago, and Milwaukee), as well as growing cities in the sunbelt (Louisville, New Orleans, Houston, and Sacramento). The book concludes with a discussion of promising policy alternatives.
AUTHOR BIOGRAPHY
Gregory D. Squires is an associate professor of sociology at the University of Wisconsin, Milwaukee. He is coauthor of Chicago: Race, Class, and the Response to Urban Decline.