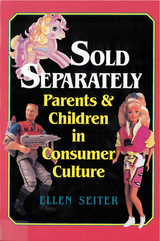 "A radical approach to children's TV. . . . Seiter argues cogently that watching Saturday cartoons isn't a passive activity but a tool by which even the very young decode and learn about their culture, and develop creative imagination as well. Bolstered by social, political, developmental, and media research, Seiter ties middle-class aversion to children's TV and mass-market toys to an association with the 'uncontrollable consumerism'––and hence supposed moral failure––of working class members, women, and 'increasingly, children.' . . . Positive guidance for parents uncertain of the role of TV and TV toys in their children's lives."––Kirkus Reviews

"Sold Separately is about television and toys, and the various roles that they play in the lives of children and parents. In particular, Seiter examines toy advertising, both in print media and on television; TV commercials; toy-based video for girls, with an in-depth look at "My Little Pony"; action TV for boys, using "Slimer and the Real Ghostbusters" as her case study; and the stores where toys are sold, both Toys "R" Us and the more upscale shops . . . contains many provocative observations."––Women's Review of Books

"Ellen Seiter has a holiday message for yuppie parents who feel guilty shopping at Toys "R" Us. The mass-produced toys that dominate the chain's shelves need not be the enemy of every right-thinking parent. "Ghostbuster" figurines and "My Little Pony" can share the toy chest with those sensible wooden blocks."––Chronicle of Higher Education

"Emphasizing problems of socioeconomic class, gender, and race stereotyping, this study acknowledges the usual parental complaints about toys like Barbie and G.I. Joe, but insists that they do play an important role in children's culture, especially for working class families. A thought-provoking analysis."––Wilson Library Journal

"In this thought provoking study, Seiter reasonably urges parents and others to put aside their own tastes and to understand that children's consumer culture promotes solidarity and sociability among youngsters."––Publishers Weekly

"An important book for those desiring an overview of the toy industry's impact on consumer culture . . . [it] presents a fair and well-balanced view of the industry."––Kathleen M. Carson, associate editor, Playthings

"A refreshing, thoughtful, and insightful investigation of an enormously important subject––consumer culture for kids. . . . I can't recommend it highly enough."––Janice Radway, Duke University, author of Reading the Romance