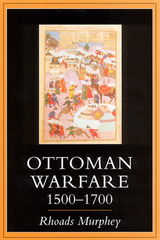 Ottoman Warfare is an impressive and original examination of the Ottoman military machine, detailing its success in Europe, North Africa, and the Middle East. Focusing primarily on the evolution of the Ottoman military organization and its subsequent impact on Ottoman society in a period of change, the book redresses the historiographical imbalance in the existing literature, analyzing why the Ottomans were the focus of such intense military concern.Several books have been written on the fiscal, technological, tactical, and political dimensions of Ottoman military history; little has been attempted, however, to recreate or evoke the physical and psychological realities of war as experienced by Ottoman soldiers. Rhoads Murphey seeks to rectify this imbalance, favoring operational matters and providing a detailed study of a number of campaigns: we are offered, for example, vivid descriptions of life in the trenches with the diggers at Baghdad in 1638, who dug a total of five miles at 50 yards a day. Murphey's analysis does not focus on the Ottoman's success or failure in particular campaigns per se; he focuses on understanding the actual process of how the Ottoman military machine worked.This long-awaited work will become the definitive study of Ottoman warfare in the early modern period, and will be invaluable to those studying the Ottoman Empire and early modern European history in general.
AUTHOR BIOGRAPHY
RHOADS MURPHEY is Senior Lecturer at the Centre for Byzantine, Ottoman and Modern Greek Studies, University of Birmingham. He is the author of several books on the Ottomans, including Regional Structure in the Ottoman Economy.