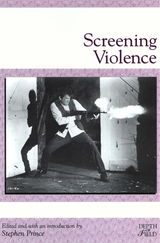 Graphic cinematic violence is a magnet for controversy.  From passionate defenses to outraged protests, theories abound concerning this defining feature of modern film: Is it art or exploitation, dangerous or liberating?

Screening Violence  provides an even-handed examination of the history, merits, and effects of cinematic “ultraviolence.”  Movie reviewers, cinematographers, film scholars, psychologists, and sociologists all contribute essays exploring topics such as:

· the explosion of screen violence following the 1967 releases of Bonnie and Clyde  and The Dirty Dozen, and the lasting effects of those landmark films

· the implications of our growing desensitization to murder and  mayhem, from The Wild Bunch  to The Terminator

AUTHOR BIOGRAPHY
Stephen Prince is associate professor of communication studies at Virginia Tech. He has written many books on film, including The Warrior's Camera: The Cinema of Akira Kurosawa, and Movies and Meaning: An Introduction to Film.