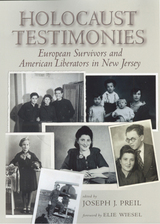 A project of the Holocaust Resource Center of Kean University, New Jersey, this book is a reference tool for teaching the Holocaust, for Holocaust survivors and their families, and for the general reader. Drawing on the center’s central missions is to produce and preserve a series of oral-history videotapes based on the personal experiences of Holocaust survivors who reside in New Jersey. Joseph J. Preil brings together the most compelling testimonies of 153 Holocaust survivors as well as twenty concentration-camp liberators. Through these riveting accounts, the book traces the mass murder of the Jews across Europe in a geographical as well as chronological order. The testimonies in each chapter are grouped by the witnesses’ country or region of origin, preceded by a brief introduction of the history of events in a particular area. In the last part of the book, American soldiers recount their impressions of being present at the liberation of the camps.

“If you can imagine that the Jew to the German was like a cockroach. In the United States, if you step on a cockroach . . . it doesn’t mean anything to you. The same thing, exactly the same thing, the Jew was to the German—a cockroach. . . . One particular Shabbos (Sabbath), they shot twelve or thirteen people in my area. In other words, the German had the right, if he saw me, any Jew that he saw in the street, he could go over to you calmly, take out his revolver, and put it to your head, and shoot you down like a . . . roach. . . . It was a free-for-all.”—Testimony of Sol Einhorn, cited in Holocaust Testimonies: European Survivors and American Liberators in New Jersey

AUTHOR BIOGRAPHY
Joseph J. Preil is a professor of education at Kean University.
REVIEWS
Praise for Holocaust TestimoniesRead this collection. The cruelty of the killers, the cowardice of the bystanders, the brutality of the collaborators, the desperate faith of the believers, the solitude of the condemned, the magnificent bravery of the liberators: all of these themes appear here. These survivors and their liberators are speaking to you. Listen to them, and you will be grateful to them.
— Elie Wiesel

The book is a collection of first-hand accounts by 153 survivors and testimony of 20 liberators of concentration camps.
— New York Times

A valuable addition to the literature and resources for Holocaust education. . . . In its efforts to teach the Holocaust, the book offers, in a clear and well-organized manner, firsthand experiences of survivors and liberators. The division of such accounts according to the geographic areas of Nazi-occupied countries is an excellent way to demonstrate the similarities and differences among the communities of occupied Europe.
— New Jersey Jewish News