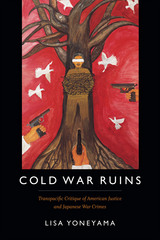 In Cold War Ruins Lisa Yoneyama argues that the efforts intensifying since the 1990s to bring justice to the victims of Japanese military and colonial violence have generated what she calls a "transborder redress culture." A product of failed post-World War II transitional justice that left many colonial legacies intact, this culture both contests and reiterates the complex transwar and transpacific entanglements that have sustained the Cold War unredressability and illegibility of certain violences. By linking justice to the effects of American geopolitical hegemony, and by deploying a conjunctive cultural critique—of "comfort women" redress efforts, state-sponsored apologies and amnesties, Asian American involvement in redress cases, the ongoing effects of the U.S. occupation of Japan and Okinawa, Japanese atrocities in China, and battles over WWII memories—Yoneyama helps illuminate how redress culture across Asia and the Pacific has the potential to bring powerful new and challenging perspectives on American exceptionalism, militarized security, justice, sovereignty, forgiveness, and decolonization.
AUTHOR BIOGRAPHY
Lisa Yoneyama is Professor of East Asian Studies and Women & Gender Studies at the University of Toronto, the coeditor of Perilous Memories: The Asia-Pacific War(s), also published by Duke University Press, and the author of Hiroshima Traces: Time, Space, and the Dialectics of Memory.
REVIEWS
-- Teemu Laulainen LSE Review of Books

Introduction. Transpacific Cold War Formations and the Question of (Un)Redressability  1

Part I. Space of Occupation