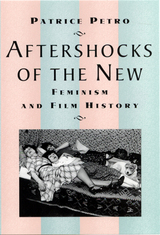 The beginning of this century has brought with it a host of assumptions about the newness of our technologies, globalized economies, and transnational media practices. Our own time is a period marked by experiences of fragmentation, sensation, and shock. The essays here are joined by a common concern to chart another side to modernity—precisely after the shock of the new—when the new ceases to be shocking, and when the extraordinary and the sensational become linked to the boring and the everyday. Patrice Petro explores how the mechanisms of modernism, German cinema, and feminist film theory have evolved, and she discusses the directions in which they are headed.

Petro’s essays—some published here for the first time—raise such questions as: What roles do television and other media play in film studies? What is the place of feminist film theory in our conceptions of film history? How is German film theory situated within international film theory?

Rather than continue to sensationalize sensation, Aftershocks of the New aims to lower the volume of debates over the place of cinema within the culture of modernity. And it accomplishes this by locating them within a more complex matrix of contending sensibilities, voices, and impulses.

AUTHOR BIOGRAPHY
Patrice Petro teaches film studies in the English department at the University of Wisconsin-Milwaukee, where she is also the director of the Center for International Education. She is the author of Joyless Streets: Women and Melodramatic Representation in Weimar Germany, and the editor of Fugitive Images: From Photography to Video.