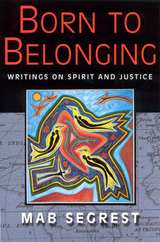 Veteran activist Mab Segrest takes readers along on her travels to view a world experiencing extraordinary change. As she moves from place to place, she speculates on the effects of globalization and urban development on individuals, examines the struggles for racial, economic, and sexual equality, and narrates her own history as a lesbian in the American South. From the principle that we all belong to the human community, Segrest uses her personal experience as a filter for larger political and cultural issues. Her writings bring together such groups as the Ku Klux Klan in North Carolina, fledging gay rights activists in Zimbabwe, and resistance fighters in El Salvador. Segrest expertly plumbs her own personal experiences for organizing principles and maxims to combat racism, homophobia, sexism, and economic exploitation.

AUTHOR BIOGRAPHY
Mab Segrest is the acting chair of the gender and womens studies department at Connecticut College. A writer, teacher, and organizer, she has published three books, most recently Memoir of a Race Traitor, which was named an Outstanding Book on Human Rights in North America and was Editors Choice for the Lambda Literary Awards.