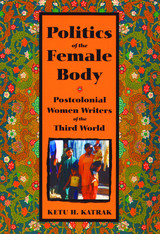 Is it possible to simultaneously belong to and be exiled from a community? In Politics of the Female Body, Ketu H. Katrak argues that it is not only possible, but common, especially for women who have been subjects of colonial empires.

Through her careful analysis of postcolonial literary texts, Katrak uncovers the ways that the female body becomes a site of both oppression and resistance. She examines writers working in the English language, including Anita Desai from India, Ama Ata Aidoo from Ghana, and Merle Hodge from Trinidad, among others. The writers share colonial histories, a sense of solidarity, and resistance strategies in the on-going struggles of decolonization that center on the body.

Bringing together a rich selection of primary texts, Katrak examines published novels, poems, stories, and essays, as well as activist materials, oral histories, and pamphlets—forms that push against the boundaries of what is considered strictly literary. In these varied materials, she reveals common political and feminist alliances across geographic boundaries.

A unique comparative look at women’s literary work and its relationship to the body in third world societies, this text will be of interest to literary scholars and to those working in the fields of postcolonial studies and women’s studies.

AUTHOR BIOGRAPHY
Ketu H. Katrak is a professor in the department of Asian American studies (Chair, 1996-2004), and the departments of English and Comparative Literature at the University of California, Irvine. She is the author of Wole Soyinka and Modern Tragedy: A Study of Dramatic Theory and Practice and coeditor of Antifeminist Harassment in the Academy.
TABLE OF CONTENTS