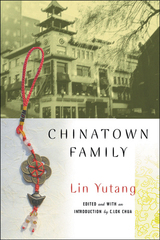 Lin Yutang (1895–1976), author of more than thirty-five books, was arguably the most distinguished Chinese American writer of the twentieth century. In Chinatown Family, he brings humor and wisdom to issues of culture, race, and religion as he tells the engrossing and heart-warming story of an immigrant, working-class Chinese American family that settled in New York City during the 1930s and 1940s. Tracing their sometimes troubled and sometimes rewarding journey, Lin paints a vivid portrait of the wonder and the woe of settling into a new land. In an era when interracial marriages were frowned upon and it was forbidden for working-class Chinese men to bring their families to America, this story shows how one family struggled to become new Americans by applying their Taoist philosophy to resist peacefully the discriminatory laws and racism they encountered.

Beyond the quest for acceptance and economic success, Chinatown Family also probes deep into the heart of the immigration experience by presenting the perils of assimilation. The burgeoning tensionbetween the desire for material wealth and the traditional Chinese belief in the primary importance of family poses the question: Is it possible to attain the American dream without damaging these primary ties? For each family member, the answer to this question turns out to be different. Through the varied paths that each character takes, the novel dramatizes the ways that Chinese immigrants have negotiated between the competing interests of economic opportunity and traditional values.

C. LOK CHUA is a professor of English at California State University in Fresno.