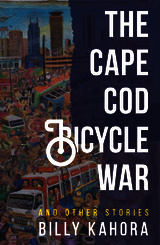 Each of the realistic worlds Billy Kahora brings us in the short stories and novella that make up The Cape Cod Bicycle War and Other Stories explores the tensions and transitions of characters moving between youthful folly and a precarious adulthood. In the title story, immigrant workers with varying ambitions work at a Wendy’s in wintry Cape Cod. Sharing one house, they must also share, or rather compete for, bicycles—crucial transportation—which are in short supply.

In other stories, a young man caught between a broken family and political violence befriends an aged gorilla in a Nairobi zoo; a pastor struggles to come to terms with the arrest of his brother, who is suspected of terrorism; and a dissolute bank employee on a serious bender returns to work to face a review board.

The Cape Cod Bicycle War and Other Stories is Billy Kahora’s long-awaited debut collection. Stories in this volume have appeared in Granta and McSweeney’s and have been shortlisted for the Caine Prize for African Writing.

Billy Kahora teaches creative writing at the University of Bristol and is the former managing editor at Kwani?. His work has appeared in a number of international publications.