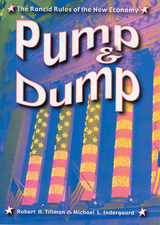 In Pump and Dump: The Rancid Rules of the New Economy,Robert H. Tillman and Michael L. Indergaard argue that these scandals are symptoms of a corporate governance problem that began in the 1990s as New Economy pundits claimed that advances in technology and forms of business organization were changing the rules. A decade later, it looked more like a case of no rules. Endless revelations of fraud in the wake of corporate bankruptcies left ordinary investors bewildered and employees out of work with little or nothing.

Tillman and Indergaard observe that victims were taken in by organized behavior that calls to mind “pump and dump” schemes where shadowy swindlers push penny stocks. Yet, in the 1990s it was high-profile firms and high-status accomplices (financial analysts, bankers, and accountants) who used powerful institutional levers to pump the value of stock—duping investors while insiders sold their holdings for fantastic profits before the crash.

The authors explain how it was that so much of corporate America came to resemble a two-bit securities scam by focusing on the rules that mattered in three critical industries—energy trading, telecommunications, and dot-coms. Free-market hype and policies at the national level set the tone. While Wall Street wrapped itself in star-spangled packaging and celebrated its purported “democratization,” in the real halls of democracy congressional allies of business gutted protections for ordinary investors. In the regulatory vacuum that resulted, business professionals who were supposed to watch corporations instead promoted New Economy doctrines and worked with executives to tout their firms as New Economy contenders. Ringleaders in the inner circles that committed fraud made their own rules, which they enforced through a mix of bribery and bullying.

At a time when there is growing debate about proposals to privatize programs like Social Security and to promote an “ownership society,” Pump and Dump offers a path-breaking analysis of America’s most urgent economic problem: a system that relies on self-regulation and the rancid politics that continue to support the short-term interests of financial elites over the long-term interests of most Americans.

REVIEWS
Pump and Dump is a great achievement. It is well written and lucid and will be read widely and assigned in classes. It will appeal to white-collar crime scholars, social scientists more generally, and to a general readership.
— Kitty Calavita, professor of criminology, law and society at the University of California, Irvin