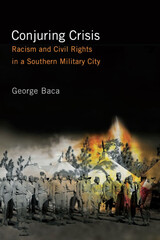 How have civil rights transformed racial politics in America? Connecting economic and social reforms to racial and class inequality, Conjuring Crisis counters the myth of steady race progress by analyzing how the federal government and local politicians have sometimes "reformed" politics in ways that have amplified racism in the post civil-rights era.

In the 1990s at Fort Bragg and Fayetteville, North Carolina, the city's dominant political coalition of white civic and business leaders had lost control of the city council. Amid accusations of racism in the police department, two white council members joined black colleagues in support of the NAACP's demand for an investigation. George Baca's ethnographic research reveals how residents and politicians transformed an ordinary conflict into a "crisis" that raised the specter of chaos and disaster. He explores new territory by focusing on the broader intersection of militarization, urban politics, and civil rights.
AUTHOR BIOGRAPHY
George Baca is a research scholar at John Jay College of Criminal Justice, City University of New York. He is the editor of Nationalism's Bloody Terrain: Racism, Class Inequality, and the Politics of Recognition, coeditor of Empirical Futures: Anthropologists and Historians Engage the Work of Sidney W. Mintz, and associate editor of Dialectical Anthropology.
REVIEWS
"Baca provides a valuable window into the complex world of modern racism, in which it is sometimes difficult to distinguish between the victim and the perpetrator. Highly recommended."
— Choice

"Baca does a solid job of providing local and regional back story to the ongoing racial dramas in Fayetteville, North Carolina. His work make a very powerful statement about the care citizens have to take vis-a-vis the statements made by their political representatives regarding whose interests they serve."
— Contemporary Sociology

"Conjuring Crisis is a gem. It takes us into the social drama around federal funding and racism at the twin communities of Fort Bragg and Fayetteville—giving us a rich exploration of the contradictions of 21st century America. George Baca teaches us about post-segregation racism, and also about the unusual role played by the military in and around southern cities."
— Vijay Prashad, author of The Darker Nations: A People's History of the Third World

"This book is an impressive and significant contribution to the ongoing debate over how and why race matters in urban politics. Baca provides an extremely intriguing study of how racial hysteria follows a tradition of cultivating and mobilizing white racial anxiety that extends back to the era of slavery."
— John Hartigan, Professor of Anthropology, University of Texas

"The book's unsettling message is that a new kind of racism has emerged to replace the 'overtly racist' system that the civil rights reforms of the 1960s were designed to overcome. A fascinating study."
— Journal of Southern History