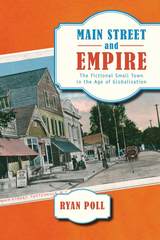 The small town has become a national icon that circulates widely in literature, culture, and politics as an authentic American space and community. Yet there are surprisingly few critical studies that analyze the small town’s centrality to the United States’ identity and imagination.

In Main Street and Empire, Ryan Poll addresses this need, arguing that the small town, as evoked by the image of “Main Street,” is not a relic of the past but rather a metaphorical screen upon which America’s “everyday” stories and subjects are projected on both a national and global scale.

Bringing together a broad selection of texts—from Thornton Wilder’s Our Town, Grace Metalious’s Peyton Place, and Peter Weir’s The Truman Show to the speeches of William McKinley, Ronald Reagan, Sarah Palin, and Barack Obama—Poll examines how the small town is used to imagine and reproduce the nation throughout the twentieth- and into the twenty-first century. He contends that the dominant small town, despite its innocent, nostalgic appearance, is central to the development of the U.S. empire and global capitalism.

REVIEWS
“Elegantly written, Main Street and Empire is of the utmost importance to the reconceptualization of American exceptionalism within a transnational geography. This book is certain to exert a major influence on accounts of global American modernity for many years to come.”
— Donald E. Pease, founding director of the Futures of American Studies Institute at Dartmouth

"The most incisive analysis available about representational discourses of small towns U.S.A. From classic texts to corporate advertising, Poll reveals a small town imaginary shaping an age of globalization."

"Using broad cultural analysis, Poll investigates the centrality of the small town, as represented in literature, to the cultural imagination of the US. An impressive, multifaceted exploration of the small town as a symbol. Readers with some background in literary theory will find this book most compelling. Recommended."
— Choice

1. Sacred Islands in Modernity: The Prehistory of the Dominant Small Town
2. An Unfinished Revolution: "The Revolt from the Village" Reconsidered
3. Mapping the Modern Small Town: A Circular Imaginary
4. A New Machine in the Small-Town Garden: Periodizing an Automodernity
5. The Formation of a U.S. Fascist Aesthetics; or, Welcome to Main Street
6. Staging and Archiving the Nation: Pedagogical Theater, Thornton Wilder's Our Town, and U.S. Imperialism
7. "One Happy World": The Postmodern Small Town and the Small-Town Postmodern
8. Global Belonging: The Small Town as the World's Home