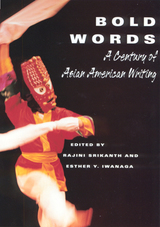 A century of Asian American writing has generated a forceful cascade of "bold words." This anthology covers writings by Asian Americans in all genres, from the early twentieth century to the present. Some sixty authors of Chinese, Filipino, Japanese, Korean, South Asian, and Southeast Asian American origin are represented, with an equal split between male and female writers. The collection is divided into four sections-memoir, fiction, poetry, and drama-prefaced by an introductory essay from a well-known practitioner of that genre: Meena Alexander on memoir, Gary Pak on fiction, Eileen Tabios on poetry, and Roberta Uno on drama. The selections depict the complex realities and wide range of experiences of Asians in the United States. They illuminate the writers' creative responses to issues as diverse as resistance, aesthetics, biculturalism, sexuality, gender relations, racism, war, diaspora, and family. Rajini Srikanth teaches at the University of Massachusetts, Boston. She is the coeditor of the award-winning anthology Contours of the Heart: South Asians Map North America and the collection A Part, Yet Apart: South Asians in Asian America. Esther Y. Iwanaga teaches Asian American literature and literature-based writing courses at Wellesley College and the University of Massachusetts, Boston.
TABLE OF CONTENTS