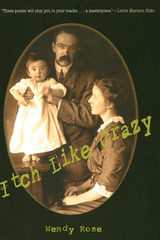 Itch Like Crazy
by Wendy Rose
University of Arizona Press, 2002
Paper: 978-0-8165-2177-7
Among Native American writers of mixed-blood heritage, few have expressed their concerns with personal identity with as much passion as Wendy Rose. A mainstay among American Indian poets whose work addresses these issues, she is a writer with whom readers of diverse ethnic backgrounds have consistently identified.

In her latest work, Rose returns to these major motifs while exploring a new dimension: using poetry as a tool to delve into the buried secrets of family history—and all of American history as well. Confronting questions of personal history that itch like crazy—the irritations that drive human existence—she acknowledges and pays tribute to her Indian and European ancestors without hiding her anger with American society.

Rose's poems are strong political and social statements that have a distinctly narrative flavor. Here are Europeans who first set foot on America's shores while Taino Indians greeted them as if they were visiting neighbors; Hopi and Miwok "Clan Mothers, grand-daughters, all those the missionaries erased"; and European forebears who as settlers pushed their way relentlessly west. Through her vivid imagery, she speaks to and for these ancestors with a sense of loss and an itching caused by the biases provoked by ethnic chauvinism.

Itch Like Crazy is a finely crafted literary work that is also a manifesto addressing contacts and conflicts in the history of Indian-white relations. By presenting another view of U.S. history and its impact on the Native Americans who are her ancestors, it offers a new appreciation of the issue of "tribal identity" that too often faces Native peoples of the Americas—and is too often misunderstood by Euro-American society.
AUTHOR BIOGRAPHY
Wendy Rose is the author of several volumes of poetry, including Now Poof She Is Gone and The Halfbreed Chronicles.