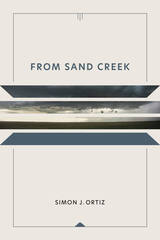 The massacre of Cheyenne and Arapaho women and children by U.S. soldiers at Sand Creek in 1864 was a shameful episode in American history, and its battlefield was proposed as a National Historic Site in 1998 to pay homage to those innocent victims. Poet Simon Ortiz had honored those people seventeen years earlier in his own way. That book, from Sand Creek, is now back in print.

Originally published in a small-press edition, from Sand Creek makes a large statement about injustices done to Native peoples in the name of Manifest Destiny. It also makes poignant reference to the spread of that ambition in other parts of the world—notably in Vietnam—as Ortiz asks himself what it is to be an American, a U.S. citizen, and an Indian. Indian people have often felt they have had no part in history, Ortiz observes, and through his work he shows how they can come to terms with this feeling. He invites Indian people to examine the process they have experienced as victims, subjects, and expendable resources—and asks people of European heritage to consider the motives that drive their own history and create their own form of victimization.

Through the pages of this sobering work, Ortiz offers a new perspective on history and on America. Perhaps more important, he offers a breath of hope that our peoples might learn from each other:

This America
has been a burden
of steel and mad
death,
but, look now,
there are flowers
and new grass
and a spring wind
rising
from Sand Creek.
AUTHOR BIOGRAPHY
Poet, fiction writer, essayist, and storyteller Simon Ortiz is a native of Acoma Pueblo and is the author of numerous books.
REVIEWS
"One of the classic books of Native American poetry . . . Ortiz's ravishing and haunting tribute to the tragedy at Sand Creek has never been equaled." —Bloomsbury Review

“A vision of damnation and resistance which is nevertheless understanding and even hopeful.” —Thomas McGrath
— -

TABLE OF CONTENTS
Preface
from Sand Creek
About the Author