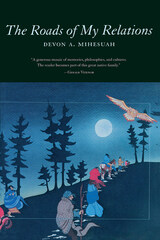 "I've traveled a lot of roads, but never alone. My relations are with me," says Billie McKenney, one of the matriarchs of the complex family of Choctaws searching for peace as the white world rapidly encroaches on their tribal land, politics, and values. In her first collection of stories, Native American writer Devon A. Mihesuah chronicles the lives of several generations of a close-knit Choctaw family as they are forced from their traditional homeland in nineteenth-century Mississippi and endure unspeakable sorrows during their journey before settling in southeastern Oklahoma.

Blending family lore, stark realism, and vivid imagination, The Roads of My Relations relays a strong sense of Choctaw culture and world view in absorbing tales of history and legend. Unfolding through the voices and actions of family members, confused half-bloods, and unlikely heroes—not all of them living or even human—the stories tell of the horrors of forced removal, the turbulence of post Civil War Indian Territory, the terrifying violence suffered at the hands of immortal Crow witches, and the family's ultimate survival against forces of evil. Time-traveling ghosts, mysterious medicine men, and eerie shape-shifters share the pages with proud matriarchs, mischievous schoolgirls, and loving siblings.

Together, these interwoven stories express the strength and persistence of a tribe whose identity and pride have survived the disruptions of colonialism. With The Roads of My Relations, Devon A. Mihesuah has created a universal and timeless exploration of heritage, spirituality, and the importance of preserving and passing on tradition.

AUTHOR BIOGRAPHY
An enrolled member of the Choctaw Nation of Oklahoma, Devon A. Mihesuah is the editor of the American Indian Quarterly and the author of numerous nonfiction books and articles. She is Professor of Applied Indigenous Studies at Northern Arizona University in Flagstaff.