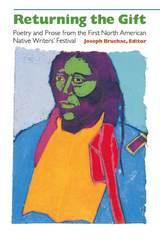 An unprecedented gathering of more than 300 Native writers was held in Norman, Oklahoma, in 1992. The Returning the Gift Festival brought more Native writers together in one place than at any other time in history. "Returning the Gift," observes co-organizer Joseph Bruchac, "both demonstrated and validated our literature and our devotion to it, not just to the public, but to ourselves." In compiling this volume, Bruchac invited every writer who attended the festival to submit new, unpublished work; he then selected the best of the more than 200 submissions to create a collection that includes established writers like Duane Niatum, Simon Ortiz, Lance Henson, Elizabeth Woody, Linda Hogan, and Jeanette Armstrong, and also introduces such lesser-known or new voices as Tracy Bonneau, Jeanetta Calhoun, Kim Blaeser, and Chris Fleet.

The anthology includes works from every corner of the continent, representing a wide range of tribal affiliations, languages, and cultures. By taking their peoples' literature back to them in the form of stories and songs, these writers see themselves as returning the gift of storytelling, culture, and continuance to the source from which it came. In addition to contributions by 92 writers are two introductory chapters: Joseph Bruchac comments on the current state of Native literature and the significance of the festival, and Geary Hobson traces the evolution of the event itself.
REVIEWS
"An excellent, readable, exciting anthology." —Booklist"This collection presents some of the best known Native writers, and a host of new voices to be alert for." —Library Journal"Returning the Gifts is a valuable work clearly in touch with native patterns of perception as the indispensable guide to adaptation within the chnaging environment." —World Literature Today