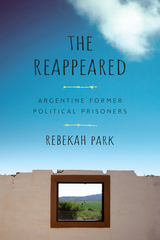 Between 1976 and 1983, during a period of brutal military dictatorship, armed forces in Argentina abducted 30,000 citizens. These victims were tortured and killed, never to be seen again. Although the history of los desaparecidos, “the disappeared,” has become widely known, the stories of the Argentines who miraculously survived their imprisonment and torture are not well understood. The Reappeared is the first in-depth study of an officially sanctioned group of Argentine former political prisoners, the Association of Former Political Prisoners of Córdoba, which organized in 2007.

Using ethnographic methods, anthropologist Rebekah Park explains the experiences of these survivors of state terrorism and in the process raises challenging questions about how societies define victimhood, what should count as a human rights abuse, and what purpose memorial museums actually serve. The men and women who reappeared were often ostracized by those who thought they must have been collaborators to have survived imprisonment, but their actual stories are much more complex. Park explains why the political prisoners waited nearly three decades before forming their own organization and offers rare insights into what motivates them to recall their memories of solidarity and resistance during the dictatorial past, even as they suffer from the long-term effects of torture and imprisonment.

The Reappeared challenges readers to rethink the judicial and legislative aftermath of genocide and forces them to consider how much reparation is actually needed to compensate for unimaginable—and lifelong—suffering.
AUTHOR BIOGRAPHY
REBEKAH PARK is a research scholar with the Center for the Study of Women at University of California, Los Angeles, and works as an applied anthropologist in New York City.
REVIEWS
"This is a pioneering study about former political prisoners in post-dictatorship Argentina. Anthropologist Rebekah Park sheds light on enduring struggles and human rights processes embodied in a remarkable group of activists fiercely committed to political change and accountability."
— Susan Slyomovics, author of How to Accept German Reparations

"Chronicling the Association of Former Political Prisoners of Córdoba—an officially sanctioned group of Argentine political prisons—Park analyzes group members' contested place within the larger human rights community in Argentina. The book provides a valuable look at the continuing human rights struggles of those targeted during the dictatorship as well as the divisions and disagreements. By focusing on Córdoba, Park also offers an important example of how those outside Buenos Aires organize and attempt to deal with continuing issues related to their treatment during the dictatorship. Recommended."
— Choice

"[The Reappeared] makes a significant contribution to studies of human rights as it helps readers understand the gray areas of victimhood and demands that societies create spaces for complex victims as they deal with the aftermath of violence."
— Anthropological Quarterly

"The Reappeared turns our beliefs of victimhood upside down. Who qualifies as a victim in transitional justice mechanisms? Park argues that victims are unequal and legal rights can only do so much to protect them ... This all makes The Reappeared a welcome wakeup call from our dream that human rights can protect all victims equally at all times and that transitional justice mechanisms can provide sufficient redress for survivors."
— Allegra Lab: Anthropology, Law, Art & World