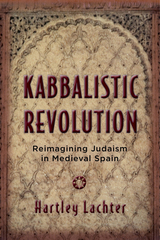 The set of Jewish mystical teachings known as Kabbalah are often imagined as timeless texts, teachings that have been passed down through the millennia. Yet, as this groundbreaking new study shows, Kabbalah flourished in a specific time and place, emerging in response to the social prejudices that Jews faced.

Hartley Lachter, a scholar of religion studies, transports us to medieval Spain, a place where anti-Semitic propaganda was on the rise and Jewish political power was on the wane. Kabbalistic Revolution proposes that, given this context, Kabbalah must be understood as a radically empowering political discourse.  While the era’s Christian preachers claimed that Jews were blind to the true meaning of scripture and had been abandoned by God, the Kabbalists countered with a doctrine that granted Jews a uniquely privileged relationship with God. Lachter demonstrates how Kabbalah envisioned this increasingly marginalized group at the center of the universe, their mystical practices serving to maintain the harmony of the divine world.

For students of Jewish mysticism, Kabbalistic Revolution provides a new approach to the development of medieval Kabbalah. Yet the book’s central questions should appeal to anyone with an interest in the relationships between religious discourses, political struggles, and ethnic pride.
AUTHOR BIOGRAPHY
HARTLEY LACHTER is the Phillip and Muriel Berman Professor of Jewish Studies and director of the Berman Center for Jewish Studies at Lehigh University.
REVIEWS
"This book is an exceptionally fresh and significant contribution. It is an important corrective to the tendency to sublimate social history to the history of ideas."
— Marc Michael Epstein, Vassar College

"Lachter's work is a compelling and important study of the manner in which Kabbalah responded to political and cultural pressures in Castile at a time of striking proliferation of kabbalistic literature."
— Jonathan Dauber, professor of Jewish mysticism, Yeshiva University

"A worthwhile and edifying contribution to contemporary scholarship on medieval Jewish mysticism."
— H-Judaic

TABLE OF CONTENTS
Series Page
Title Page
Copyright
Contents
Acknowledgments
Introduction
1. Masters of Secrets
2. Secrets of the Cosmos
3. Secrets of the Self
4. Jewish Bodies and Divine Power
5. Prayer Above and Below
Conclusion
Postscript
Notes
Bibliography
Index
About the Author