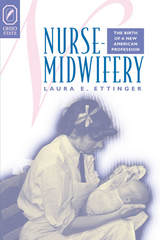 During the twentieth century modern births in America came to involve mostly male physicians, hospitals, technological interventions, and quick, routine procedures. In a unique and detailed historical study, Nurse-Midwifery: The Birth of a New American Profession, Laura E. Ettinger fills a void with the first book-length documentation of the emergence of American nurse-midwifery. This occupation developed in the 1920s involving nurses who took advanced training in midwifery. In Nurse-Midwifery, Ettinger shows how nurse-midwives in New York City; eastern Kentucky; Santa Fe, New Mexico; and other places both rebelled against and served as agents of a nationwide professionalization of doctors and medicalization of childbirth. Nurse-Midwifery reveals the limitations that nurses, physicians, and nurse-midwives placed on the profession of nurse-midwifery from the outset because of the professional interests of nursing and medicine. The book argues that nurse-midwives challenged what scholars have called the “male medical model” of childbirth, but the cost of the compromises they made to survive was that nurse-midwifery did not become the kind of independent, autonomous profession it might have been.

Today, nurse-midwives have assumed a larger role in mainstream health care than before, yet they are still marginalized. As in the past, nurse-midwives’ futures will depend on continuing changes in American attitudes about childbirth, health care, and women professionals as well as on their own ability to adapt to the changes. The history of the profession suggests that nurse-midwives will continue to navigate in difficult waters in a middle space between the mainstream and the margins of medicine and between the nursing profession and midwifery traditions.
AUTHOR BIOGRAPHY
Laura E. Ettinger is associate professor of history at Clarkson University in Potsdam, New York.
TABLE OF CONTENTS