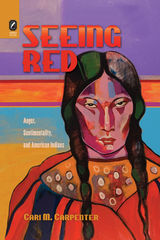 In Seeing Red, Cari M. Carpenter examines anger in the poetry and prose of three early American Indian writers: S. Alice Callahan, Pauline Johnson, and Sarah Winnemucca. In articulating a legitimate anger in the late nineteenth century, the first published indigenous women writers were met not only with stereotypes of “savage” rage but with social proscriptions against female anger. While the loss of land, life, and cultural traditions is central to the Native American literature of the period, this dispossession is only one side of the story. Its counterpart, indigenous claims to that which is threatened, is just as essential to these narratives. The first published American Indian women writers used a variety of tactics to protest such dispossession. Seeing Red argues that one of the most pervasive and intriguing of these is sentimentality.

Carpenter argues that while anger is a neglected element of a broad range of sentimental texts, it should be recognized as a particularly salient subject in early literature written by Native American women. To date, most literary scholars—whether they understand sentimentality in terms of sympathetic relations or of manipulative influence—have viewed anger as an obstacle to the genre. Placing anger and sentimentality in opposition, however, neglects their complex and often intimate relationship. This case study of three Native American women writers is not meant to fall easily into either the “pro” or “anti” sentimentality camp, but to acknowledge sentimentality as a fraught, yet potentially useful, mode for articulating indigenous women’s anger.
AUTHOR BIOGRAPHY
Cari M. Carpenter is assistant professor of English, a core member of the Native American Studies Committee, and a university affiliate of the Center for Women’s Studies at West Virginia University.
REVIEWS

“There is simply no one else (that I know of) doing what Cari M. Carpenter is doing in this project, which is examining representations of indigenous women’s anger as a potential force for social change. Her compelling readings of specific texts intervene usefully in ongoing discussions of Native American literature and its cultural and political work.” —Siobhan Senier, associate professor of English, University of New Hampshire

“There is much to admire in Seeing Red: its important and thought-provoking topic, its innovative archival and primary research, the range of its theoretical reach, and its graceful, lucid prose.” —Karen Kilcup, professor of English, University of North Carolina at Greensboro