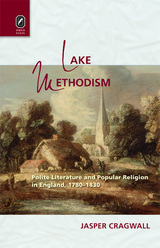 Lake Methodism: Polite Literature and Popular Religion in England, 1780-1830, reveals the traffic between Romanticism’s rhetorics of privilege and the most socially toxic religious forms of the eighteenth and nineteenth centuries. The “Lake Poets,” of whom William Wordsworth and Samuel Taylor Coleridge are the most famous, are often seen as crafters of a poetics of spontaneous inspiration, transcendent imagination, and visionary prophecy, couched within lexicons of experimental simplicity and lyrical concision. But, as Jasper Cragwall argues, such postures and principles were in fact received as the vulgarities of popular Methodism, an insurgent religious movement whose autobiographies, songs, and sermons reached sales figures of which the Lakers could only dream.
With these religious histories, Lake Methodism unsettles canonical Romanticism, reading, for example, the grand declaration opening Wordsworth’s spiritual autobiography—“to the open fields I told a prophecy”—not as poetic self-sanctification, but as a means of embarrassing Methodism, responsible for the suppression of The Prelude for half a century. The book measures this fearful symmetry between Romantic and religious enthusiasms in figures iconic and unfamiliar: John Wesley, Robert Southey, Wordsworth, Coleridge, as well as the eponymous scientist of Mary Shelley’s Frankenstein, and even Joanna Southcott, an illiterate servant turned latter-day Virgin Mary, who, at the age of sixty-five, mistook a fatal dropsy for the Second Coming of Christ (and so captivated a nation).
AUTHOR BIOGRAPHY
Jasper Cragwall is associate professor of English at Loyola University, Chicago.