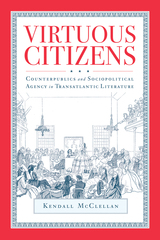 The eighteenth-century rise of the bourgeois public sphere and the contemporaneous appearance of what Nancy Fraser designates “counterpublics” deeply influenced not only how politicians and philosophers understood the relationships among citizens, disenfranchised subjects, and the state but also how members of the polity understood themselves. In Virtuous Citizens: Counterpublics and Sociopolitical Agency in Transatlantic Literature, Kendall McClellan uncovers a fundamental and still redolent transformation in conceptions of civic identity that occurred over the course of the eighteenth and nineteenth centuries. Literature of this period exposes an emotional investment in questions of civic selfhood born out of concern for national stability and power, which were considered products of both economic strength and the nation’s moral fiber.

Underlying popular opinion about who could participate in the public sphere, McClellan argues, was an impassioned rhetorical wrestling match over the right and wrong ways to demonstrate civic virtue. Relying on long-established tropes of republican virtue that lauded self-sacrifice and disregard for personal safety, abolitionist writers represented loyalty to an ideals-based community as the surest safeguard of both private and public virtue. This evolution in civic virtue sanctioned acts of protest against the state, offered disenfranchised citizens a role in politics, and helped usher in the modern transnational public sphere.

Virtuous Citizens shows that the modern public sphere has always constituted a vital and powerful space for those invested in addressing injustice and expanding democracy. To illuminate some of the fundamental issues underlying today’s sociopolitical unrest, McClellan traces the transatlantic origins of questions still central to the public representation of movements like Black Lives Matter, the Women’s March, and the Alt-Right: What is the primary loyalty of a virtuous citizen? Are patriots those who defend the current government against attacks, external and internal, or those who challenge the government to fulfill sociopolitical ideals?
AUTHOR BIOGRAPHY
Kendall McClellan is lecturer in the Department of English at California State University Channel Islands. Her peer-reviewed scholarship has appeared in MP: An International Feminist Journal as well as in the edited collection, Nineteenth Century British Traveler’s in the New World.
TABLE OF CONTENTS

Chapter 3. The Virtue of Self-Government: Fear of, or Faith in, the People

Chapter 4. “Possessed with an Idea”: American Abolitionism and Counterpublic Protest