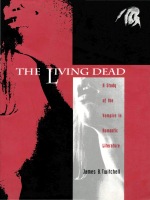 In his Preface to The Living Dead: A Study of the Vampire in Romantic Literature, James Twitchell writes that he is not interested in the current generation of vampires, which he finds "rude, boring and hopelessly adolescent. However, they have not always been this way. In fact, a century ago they were often quite sophisticated, used by artists varied as Blake, Poe, Coleridge, the Brontes, Shelley, and Keats, to explain aspects of interpersonal relations. However vulgar the vampire has since become, it is important to remember that along with the Frankenstein monster, the vampire is one of the major mythic figures bequeathed to us by the English Romantics. Simply in terms of cultural influence and currency, the vampire is far more important than any other nineteenth-century archetypes; in fact, he is probably the most enduring and prolific mythic figure we have. This book traces the vampire out of folklore into serious art until he stabilizes early in this century into the character we all too easily recognize.
AUTHOR BIOGRAPHY

James B. Twitchell is Alumni Professor of English at the University of Florida.