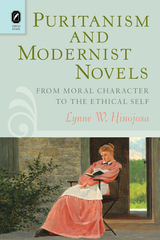 In Puritanism and Modernist Novels: From Moral Character to the Ethical Self, Lynne W. Hinojosa complicates traditional interpretations of the novel and literary modernism as secular developments of modernity by arguing that the British novel tradition is fundamentally shaped by Puritan hermeneutics and Bible-reading practices. This tradition, however, simultaneously works to dismantle the categories associated with social morality and moral character, helping to form “Puritanism” into a fictional stereotype. Hinojosa demonstrates that the novel thus perpetuates a narrative that associates Puritanism with moral and religious confinement, on the one hand, and modern longing with escape, on the other—even as it remains tied to Puritan views of history and the self.

Puritanism and Modernist Novels offers new formal and contextual readings of early modernist novels by Oscar Wilde, E. M. Forster, James Joyce, and Ford Madox Ford. Hinojosa demonstrates that, while they long for escape, these authors still question the value of the novelistic narrative of confinement and escape. Bridging modernist and novel studies, Puritanism and Modernist Novels contributes to conversations about secularization and religion in both fields, highlighting the limitations created by the secularization narrative of modernity.
AUTHOR BIOGRAPHY
Lynne W. Hinojosa is associate professor of literature in the honors program at Baylor University.
TABLE OF CONTENTS


Part One •  Theory and Context

Chapter One– From Moral Character to the Ethical Self
Chapter Two– Theory: Puritanism, the Bible, the Novel, Modernism
Chapter Three– Historical Context: The Legacy of Puritanism in the Late Nineteenth Century

Chapter Four– Reading and hegelian tragedy in Oscar Wilde’s The Picture of Dorian Gray
Chapter Five– The Renaissance of the Self in E. M. Forster’s A Room with a View
Chapter Six– The Metaethical Self: Nietzsche and Joyce
Chapter Seven– “I Leave It toYou”: Church, State, and Morality in Ford Madox Ford’s The Good Soldier