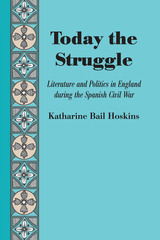 Many writers, from Aristophanes to Joseph Heller, have written about politics. But at certain periods in history, often at times of conflict and turmoil, writers have consciously used their literary talents to support or oppose a specific cause. The 1930s, a decade of widespread social and political breakdown, was such a period.

Today the Struggle examines the political involvement of those leading British writers who dedicated their talents to the defense of Nationalists or Loyalists during the Spanish Civil War and who saw that war as symbolic of their own Right-Left dialogue.

Conservatives like William Butler Yeats and T. S. Eliot and Roman Catholics like Evelyn Waugh were passionately anti-Communist. They viewed fascism as a bulwark against communism but were unwilling to support the Franco cause actively. Other pro-Nationalists were not so hesitant: Roy Campbell and Wyndham Lewis were ardent participants in the fight against the British left wing.

Pro-Loyalists, united only in their antifascism, ranged from conservative to anarchist in political commitment. Their literary contributions included fine poems by W. H. Auden and Stephen Spender, experimental drama by Auden and Christopher Isherwood, and impassioned prose by Rex Warner, George Orwell, and Aldous Huxley.

Katharine Hoskins’s principal interest in Today the Struggle is to discover how and why certain writers supported specific political actions, to ascertain the effectiveness of their efforts, and to evaluate the influence of these efforts on their work.