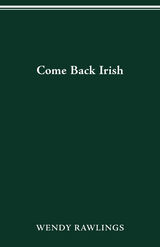 Nine inhabitants of a sleepy Irish seaside town tell what they know about a visitor from out of town who is rumored to be both attractive and dangerous. A young mother in an affluent Long Island community finds herself strangely drawn to the woman she has hired as her housekeeper. After her small business venture fails, a woman is forced to move back in with her parents and discovers they aren't the couple she thought they were at all. In fourteen expertly crafted stories, Wendy Rawlings chronicles with comic sympathy what happens when American women and Irish men, parents and children, employers and employees, hurtle toward each other and crash headlong into cultural or generational roadblocks. Like the American in the title story, who can imagine only a "litter of claddagh rings and Erin go bragh, the high-stepping of Riverdance on videocassette" until she gets on a plane and goes to Ireland, Rawlings's fiction entreats us to toss out the picture-perfect images we have of American consumer culture, Irish tourist towns, and the institution of marriage and enter the world of her fictions—more contradictory, troubling, and true.
AUTHOR BIOGRAPHY
Wendy Rawlings is an assistant professor in the Creative Writing Program at the University of Alabama in Tuscaloosa.
REVIEWS
“The stories in Come Back Irish are full of smart women and the stunning dance they do when the music is wrong men and bad decisions. Wendy Rawlings has written a sharp collection rich with mordant humor that colors her honest take on the tender estrangements that radiate from love and family. This book brims with arresting observation while it builds a world at once authentic and dear. This confident and well-written book is a pure pleasure.” —Ron Carlson, author of Plan B for the Middle Class and The Hotel Eden.


"We often speak of finding a voice in fiction. Wendy Rawlings, in her evocative stories, has rejuvenated the American idiom and invented a whole new accent. These stories speak to you in spades, an excavation of gorgeous language and striated meanings. Listen. You can't help but listen." —Michael Martone, author of Fort Wayne Is Seventh on Hitler's List, and Pensees: The Thoughts of Dan Quayle.


"In the strange, wonderful world of Come Back Irish, you'll meet the people in Wendy Rawlings's startling tales who are the survivors of fractured families. With heart-breaking clarity, Ms. Rawlings exposes the jittery dislocations of contemporary life, the precise and shattering moments when we flounder in the waves of memory, drowning in our own secret seas of unrecoverable loss." —Melanie Rae Thon, author of Sweet Hearts and Girls in the Grass