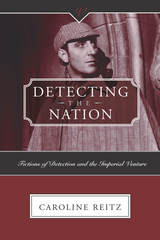 In Detecting the Nation, Reitz argues that detective fiction was essential both to public acceptance of the newly organized police force in early Victorian Britain and to acclimating the population to the larger venture of the British Empire. In doing so, Reitz challenges literary-historical assumptions that detective fiction is a minor domestic genre that reinforces a distinction between metropolitan center and imperial periphery. Rather, Reitz argues, nineteenth-century detective fiction helped transform the concept of an island kingdom to that of a sprawling empire; detective fiction placed imperialism at the center of English identity by recasting what had been the suspiciously un-English figure of the turn-of-the-century detective as the very embodiment of both English principles and imperial authority. She supports this claim through reading such masters of the genre as Godwin, Dickens, Collins, and Doyle in relation to narratives of crime and empire such as James Mill's History of British India, narratives about Thuggee, and selected writings of Kipling and Buchan. Detective fiction and writings more specifically related to the imperial project, such as political tracts and adventure stories, were inextricably interrelated during this time.
AUTHOR BIOGRAPHY
Caroline Reitz is assistant professor of English, John Jay College of Criminal Justice.
REVIEWS
“Caroline Reitz . . . argues that [Victorian detective fiction] was inaugurated as a means of domesticating and making palatable to the public the men who (often brutally) policed the Empire. Intriguingly, she suggests that the Thuggee terror network itself could have been deliberately misrepresented in order to justify more repressive means of law enforcement—and even includes the barest hint that these stories may have some troubling twenty-first-century resonances.” —Times Literary Supplement


“Dickens’s Inspector Bucket (introduced in Bleak House) and Wilkie Collins’s Sergeant Cuff (in The Moonstone) reassured the nation that authority could be simultaneously nonviolent and effective through its reliance on detection. Moreover, according to the author, the detectives’ methods were precisely those used by colonial administrators to maintain order and control throughout the nation's far-reaching empire. Thus, she contends, the minor detective story is anything but minor: it played an important role in forging British national identity. This is a thoroughly researched book, supported by extensive explanatory notes . . . .” —Choice