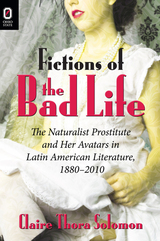 The first comprehensive and interdisciplinary study of the prostitute in Latin American literature, Claire Thora Solomon’s book The Naturalist Prostitute and Her Avatars in Latin American Literature, 1880–2010 shows the gender, ethnic, and racial identities that emerge in the literary figure of the prostitute during the consolidation of modern Latin American states in the late nineteenth century in the literary genre of Naturalism. Solomon first examines how legal, medical, and philosophical thought converged in Naturalist literature of prostitution. She then traces the persistence of these styles, themes, and stereotypes about women, sex, ethnicity, and race in the twentieth and twenty-first century literature with a particular emphasis on the historical fiction of prostitution and its selective reconstruction of the past.

Fictions of the Bad Life illustrates how at very different moments—the turn of the twentieth century, the 1920s–30s, and finally the turn of the twenty-first century—the past is rewritten to accommodate contemporary desires for historical belonging and national identity, even as these efforts inevitably re-inscribe the repressed colonial history they wish to change.
AUTHOR BIOGRAPHY
Claire Thora Solomon is assistant professor of Hispanic studies at Oberlin College.