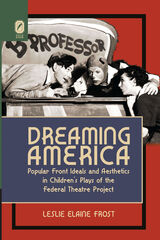 Dreaming America: Popular Front Ideals and Aesthetics in Children’s Plays of the Federal Theatre Project by Leslie Elaine Frost traces how the tumultuous politics of the late 1930s shaped the stories and staging of federally funded plays for children. Indeed, children’s theater was central to the Federal Theatre Project’s vision of building a national theater. Frost argues that representations of the child and childhood in the FTP children’s plays stage the hopes and anxieties of a nation destabilized by both economic collapse and technological advances. A declining economy and the first stagnant birthrate in three centuries yoked the national economy to the individual family. Profound disagreements over appropriate models of education and parenting, as well as over issues of ethnicity and class, constituted fundamental arguments over democratic values and social norms.

Frost locates these plays within the immediate context of the production materials in the FTP archives, as well as within the broader culture of the Great Depression, drawing on disparate primary materials—from parenting magazines to strike literature to political journals—and referencing a range of popular events—from the Joe Louis/Max Schmeling fights to Hollywood movies.

As the focus of Depression-era adult anxieties and hopes and as the embodiment of vigor, dynamism, and growth, children carried symbolic value both as the future of America and as the America of the future. Frost examines representative plays’ connections to other media, culture, and politics to situate their singular trajectories in the social history of the Federal Theatre Project and Popular Front culture.
AUTHOR BIOGRAPHY
Leslie Elaine Frost is lecturer at the University of North Carolina, Chapel Hill.
REVIEWS
“Dreaming America is first-rate scholarship. Leslie Elaine Frost has read widely in the field and has done extensive work at the FTP archives at the Library of Congress. The writing is engaging and thoughtful. It’s a fascinating story, and I believe that the strategy to link the ‘children’s’ theatre to both the ‘parental’ WPA as well as the larger battlefields of popular front politics is sound and illuminating.” —Barry Witham, professor emeritus, school of drama, University of Washington

TABLE OF CONTENTS
Contents
List of Illustrations
Acknowledgments
Introduction: Children’s Theatre of a People’s Theatre
Chapter 1: Federal Theatre Project Dreams: Raising an Educated Audience for a Permanent American National Theatre
Chapter 2: “We Should Have Called It Rumpelstiltskin”: A Labor Fairy Tale Gets Real in The Revolt of the Beavers
Chapter 3: “I Looked Him Right Square in the Eye”: Being African American in The Story of Little Black Sambo
Chapter 4: “Shadows of Your Thoughts Are Marching”: Anti-Fascism and Home-front Patriotism in Federal Theatre’s A Letter to Santa Claus and Hollywood’s The Little Princess
Chapter 5: Wishing on a Star: Pinocchio’s Journey from the Federal Stage to Disney’s World
Conclusion: Death of a Dream
Notes
Works Cited
Index