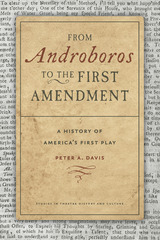 The story of America’s earliest extant play begins with a petty crime—a crime that would have passed largely unnoticed had it not been for one fact: it prompted a beleaguered royal governor of one of Britain’s colonies to lash out at his enemies by writing a biting satire. Androboros, A Bographical [sic] Farce in Three Acts (1715), is universally acknowledged as the first play both written and printed in America. Its significance stems not simply from its publication but from its eventual impact. The play inadvertently laid the foundation for one of the defining rights of the nation that would eventually emerge some seventy-five years later—the First Amendment of the Constitution of the United States, guaranteeing a free press and freedom of expression.

Androboros was not just the first of its kind, it was also ahead of its time in many ways, preceding the harsh political satires and farces of the later eighteenth century by some fifty years. Such plays served a small but essential role in promoting political thought among the colonists. Written by anonymous authors and passed from hand to hand, these short, crude, and often bawdy plays and dialogues were rarely acted due to their inflammatory lampoonery. Nevertheless, they provided an opportunity for disgruntled colonists to vent their grievances and promote their ideas to fellow citizens. The farces of the late eighteenth century drove home the meaning and message of the American Revolution.

Equally significant is that Androboros may have influenced a few of the key political discourses published in the 1730s, and these works in turn may well have shaped the future of the American political landscape for the next several decades and even into the modern era. But as a closet drama intended only to be read by close friends and political supporters, this play has languished as a minor footnote in American intellectual history. Scholarly research published to date has been, for the most part, inadequate and occasionally inaccurate. This study remedies that oversight, providing a full analysis as well as an annotated typescript and facsimiles of the original printing.
AUTHOR BIOGRAPHY
Peter A. Davis is an associate professor of theatre at the University of Illinois at Urbana-Champaign, where he chairs the Theatre Studies program and is director of graduate studies. He specializes in the economic and cultural history of theatre in early America and eighteenth-century England. His articles and reviews have appeared in most of the major theatre history journals. He was also a contributor to the Cambridge History of the American Theatre, winner of the 1999 Barnard Hewitt Award from the American Society for Theatre Research. He is a professional actor and director, and is an ensemble member with the award-winning Remy Bumppo Theatre Company of Chicago. He lives in Chicago, Illinois.
TABLE OF CONTENTS
Contents
Acknowledgments
Introduction. The Physician to the Patient
One. A “Horrid Wickedness
Two. The Governor and the Rector
Three. The Play
Four. The Tyrant and the Printer
Epilogue. The Rebel and the Rake
Appendix A
Appendix B
Notes
Bibliography
Index
REQUEST ACCESSIBLE FILE