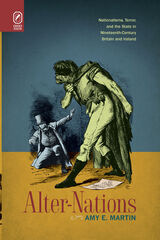 Alter-Nations: Nationalisms, Terror, and the State in Nineteenth-Century Britain and Ireland investigates how Victorian cultural production on both sides of the Irish Sea grappled with the complex relationship between British imperial nationalism and Irish anticolonial nationalism. In the process, this study reconceptualizes the history of modern nationhood in Britain and Ireland.

Taking as its archive political theory, polemical prose, novels, political cartoons, memoir, and newspaper writings, Amy E. Martin’s Alter-Nations examines the central place of Irish anticolonial nationalism in Victorian culture and provides a new genealogy of categories such as “nationalism” “terror,” and “the state.” In texts from Britain and Ireland, we can trace the emergence of new narratives of Irish immigration, racial difference, and Irish violence as central to capitalist national crisis in nineteenth-century Britain. In visual culture and newspaper writing of the 1860s, the modern idea of “terrorism” as irrational and racialized anticolonial violence first comes into being. This new ideology of terrorism finds its counterpart in Victorian theorizations of the modern hegemonic state form, which justify the state’s monopoly of violence by imagining its apparatuses as specifically anti-terrorist. At the same time, Irish Fenian writings articulate anticolonial critique that anticipates the problematics of postcolonial studies and attempts to reimagine in generative and radical ways anticolonialism’s relation to modernity and the state form. By so doing, Alter-Nations argues for the centrality of Irish studies to postcolonial and Victorian studies, and reconceptualizes the boundaries and concerns of those fields.
AUTHOR BIOGRAPHY
Amy E. Martin is associate professor of English at Mount Holyoke College.
TABLE OF CONTENTS
Contents
List of Abbreviations
List of Illustrations
Acknowledgments
Introduction
Chapter 1. “The Condition of England” and the Question of Ireland: Anti-Irish Racism and Saxon Nationalism in Victorian Writings on Capitalist National Crisis
Chapter 2. Fenianism and the State: Theorizing Violence and the Modern Hegemonic State in the Writings of Matthew Arnold and John Stuart Mill
Chapter 3. Envisioning Terror: Anticolonial Nationalism and the Modern Discourse of Terrorism in Mid-Victorian Popular Culture
Chapter 4. “A Somewhat Irish Way of Writing”: The Genre of Fenian Recollections and Postcolonial Critique
Bibliography
Index