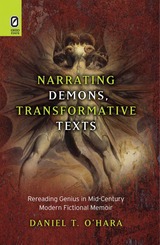 Narrating Demons, Transformative Texts: Rereading Genius in Mid-Century Modern Fictional Memoir, by Daniel T. O’Hara, acknowledges that the modern conception of literary genius is probably most lucidly expressed in the criticism of Lionel Trilling. But O’Hara also demonstrates that certain important and widely read mid-century modern fictional memoirs subversively return to an earlier conception that emphasizes the demonic nature of genius, a conception that is associated with the occult and the visionary and embraces the vision of evil articulated in earlier literature. O’Hara argues that Thomas Mann’s Doctor Faustus (1947), Vladimir Nabokov’s Lolita (1955), and William Burroughs’s Naked Lunch (1959) all demonstrate an imagining of genius in art and in life that stands in stark and total opposition to the emerging post–World War II age of conformity. These influential works show that genius is inherently a dangerous reality, albeit a creative one. Despite its most transcendent appearances, the full immanence of this conception of demonic genius condemns the modern world to a Last Judgment that is every bit as severe as any envisioned in the Western religious traditions.
AUTHOR BIOGRAPHY
Daniel T. O’Hara is Professor of English and First Mellon Term Professor of Humanities at Temple University.
REVIEWS

“Narrating Demons is a self-consciously Nietzschean study of three major mid-twentieth-century novels and their complex engagement with the ideology of genius that was so central to the culture of modernism. Anyone interested in the fates of theory in a purportedly post-theoretical age will want to read this book.” —Loren Glass, University of Iowa

TABLE OF CONTENTS
Contents
Preface
Acknowledgments
Chapter 1: The Culture of Genius at Mid-Century
Chapter 2: Of Love and Death in Modern Culture: Rereading Doctor Faustus with Freud in Mind
Chapter 3: Deus sive Natura: Avatars of the Creative Reader in Lolita
Chapter 4: Visionary Contact in the Interzone: On the Beat State in Naked Lunch
Notes
Works Cited
Index