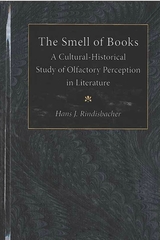 The Smell of Books: A Cultural-Historical Study of Olfactory Perception in Literature
by Hans J. Rindisbacher
University of Michigan Press, 1993
Cloth: 978-0-472-10383-6
The Smell of Books investigates the ways in which the olfactory sense has manifested itself in Italian, German, French, Russian, and English literature of the past 150 years. Against a broad interdiscriplinary backdrop that includes linguistics, psychology, aesthetics, and sociology, Hans J. Rindisbacher takes a new approach to literary history – one centered on the sense of smell.

Rindisbacher examines the works of the German Expressionists and of Baudelaire, Huxley, Rimbaud, Wilde, and Turgenev, as well as Holocaust memoirs and contemporary German books such as Patrick Suskind’s Das Parfum and Christa Wolf’s Storfall. He demonstrates that the sense of smell, which has heretofore occupied a position at the bottom of the sensory hierarchy, plays a consequential role in romantic, modern, and contemporary European and Russian literature.
TABLE OF CONTENTS