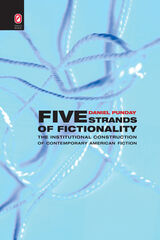 Fictions, we are so often told, are everywhere in America today. The extravagant claims of advertising are everywhere, much of the day’s news concerns “pseudo-events” like rallies or ceremonies staged so that they can be reported on, and philosophers doubt even the possibility of any knowledge being objective. Thus we seem less and less able to distinguish between the real and the invented.

In Five Strands of Fictionality: The Institutional Construction of Contemporary American Fiction, Daniel Punday examines the “postmodern” expansion of fictionality—the feeling today that the line between the real and the invented is harder to draw—and argues that this feeling reflects a struggle by different cultural groups to define how we tell and use “literary” stories. He discusses the literary texts of John Barth, Alice Walker, and Ishmael Reed; paraliterary forms like science fiction and electronic writing; and resolutely nonliterary texts, especially role-playing games, in terms of how each responds to the institution of literature through its definition of fictionality.

For too long, postmodernism has been described by easy generalizations—relativist, indeterminate, commercialized—that have rendered the term nearly worthless. Punday applies a more nuanced understanding of fictionality to a variety of contemporary narrative forms that occupy different locations within postmodern literary culture. Approaching postmodernism as a configuration of institutions that legitimize fictionality, he illuminates the nature of creative writing and the conflicts between different literary groups in America today.
AUTHOR BIOGRAPHY
Daniel Punday is professor of English, Purdue University Calumet.
TABLE OF CONTENTS
Contents
Acknowledgments
Introduction. Fictionality Today
Chapter 1. Myth and the Institutional Construction of Postmodernism in The Friday Book
Chapter 2. Folk Culture, the Archive, and the Work of the Imaginary
Chapter 3. Fiction, Fraud, and Fakes
Chapter 4. Style and Symptom in Postmodern Science Fiction
Chapter 5. Role-Playing Games, Possible World Theory, and the Fictionality of Assemblage
Chapter 6. Institutional Sutures in Electronic Writing
Conclusion. Fictionality in the Public Sphere
Works Cited
Index