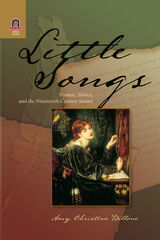 In Little Songs: Women, Silence, and the Nineteenth-Century Sonnet, Amy Christine Billone analyzes the bond between lyric poetry and silence in women’s sonnets ranging from the late eighteenth-century works of Charlotte Smith, Helen Maria Williams, and Anna Maria Smallpiece to Victorian texts by Elizabeth Barrett, Christina Rossetti, Isabella Southern, and other, lesser-known female poets. Although scholars acknowledge that women initiated the sonnet revival in England, Little Songs is the only major study of nineteenth-century female sonneteers.

Billone argues not that women’s sonnets overcame silence in favor of lyrical speech during the nineteenth-century sonnet revival, but rather that women simultaneously posited both muteness and volubility through style and theme. In opposition to criticism that stresses a modern shift from compensatory to non-consolatory poems of mourning, Billone demonstrates how women invented contemporary elegiac poetics a century in advance.

Adding to critical interest in the alliance between silence and literature, this book offers a complex study of the overwhelming impact that silence makes, not only on British women’s poetry, but also on the development of modern poetry and intellectual inquiry. Ultimately, Little Songs illustrates how the turn away from the kind of silence that preoccupied nineteenth-century women poets introduced the start of twentieth-century thought.
AUTHOR BIOGRAPHY
Amy Christine Billone is an assistant professor of English at the University of Tennessee.
TABLE OF CONTENTS