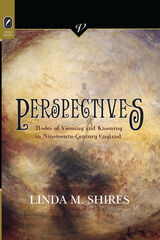 Perspectives: Modes of Viewing and Knowing in Nineteenth-Century England reopens the question of classical perspective and its vicissitudes in aesthetic practice with a focus on texts of the 1830s to the end of the 1870s. Linda M. Shires demonstrates why and how artists and writers across media experimented with techniques of dissolution, combination, and multiple viewpoints much earlier in the century than intellectual historians generally assume.

Arguing for a relationship between what she calls the disappearing “I” in poetry, a compromised omniscience, and the testing of a mastering eye in painting and photography, Shires argues that art forms themselves, rather than new technologies alone, reshaped the period by educating readers and viewers into new ways of knowing. In chapters on visual and verbal art and a waning theocentrism; D.G. Rossetti; Henry Peach Robinson and Lady Clementina Hawarden; and Robert Browning, Wilkie Collins, and George Eliot, Shires revitalizes the currently available scholarship on connections among nineteenth-century art forms.

This interdisciplinary study offers nuanced, close readings in order to rebut assertions of delayed artistic responses to the decreasing influence of traditional perspective. It shows how vision is bound up with all the senses of a viewer and it supports current concepts of modernism as transitional, rather than radical.