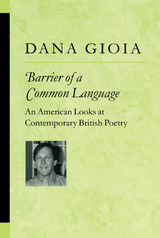 The latest offering in the Poets on Poetry series from acclaimed poet, critic, and National Endowment for the Arts' chairman Dana Gioia, Barrier of a Common Language collects essays on British poets and poetry spanning the past two decades.
Gioia ignited a national debate on the relevance of poetry in 1991 when he published an essay in the Atlantic titled "Can Poetry Matter?" The essay was expanded into a book of the same name and went on to become one of the best-selling books of contemporary poetry criticism in the 1990s.
In Barrier of a Common Language Gioia addresses the current disconnect between British and American poetry, the result of America's growing postwar self-sufficiency in its intellectual concerns and concomitant patronizing attitude toward Britain. Writes Gioia, "Today . . . most American readers are not only unfamiliar with current British poetry, but modestly proud of the fact. They do not dissemble, but urbanely flourish their ignorance as an indisputable sign of discrimination."
Whether British poetry ever regains the importance in Anglo-American literary traditions it had fifty years ago, Gioia believes, will depend on the quality of service it receives from critics, poets, editors, and anthologists who alone can make it accurately heard and understood.
Poet, critic, and acclaimed author of Can Poetry Matter? Dana Gioia is one of America's leading contemporary men of letters. Winner of the American Book Award, Gioia is internationally recognized for his role in reviving rhyme, meter, and narrative in contemporary poetry.
TABLE OF CONTENTS