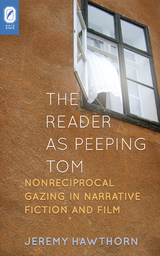 When we read a novel or watch a film, we become Peeping Toms. Spying on fictional characters, we can enjoy observing their private lives and most intimate secrets while safe in the knowledge that they are totally unaware of us. The Reader as Peeping Tom: Nonreciprocal Gazing in Narrative Fiction and Film, by Jeremy Hawthorn, examines the implications of this nonreciprocal relationship by focusing on works in which the relationships between characters are also nonreciprocal. Hawthorn focuses on four novelists and three filmmakers whose works are concerned with surveillance, spying, and voyeurism: Hawthorne, Dickens, Melville, Henry James, Hitchcock, Michael Powell, and Francis Ford Coppola.

Hawthorn suggests that while some literary and film narratives use the reader’s or viewer’s sense of all-seeing invulnerability to underwrite the various systems of control and surveillance that are depicted in the work, others associate such forms of nonreciprocal observation with impotence and impoverishment and thus critique political systems that legitimize surveillance. Hawthorn concludes that critics have underestimated the extent to which reader’s or viewer’s sense of disempowerment adds meaning to the experience of fiction and film and may encourage acceptance or criticism of spying and surveillance in the real world. The book questions benign views of the reader’s or spectator’s role as passive observer, and offers original and exciting readings of some key narrative texts.
AUTHOR BIOGRAPHY
Jeremy Hawthorn is emeritus professor in the department of language and literature at the Norwegian University of Science and Technology, Trondheim, Norway.