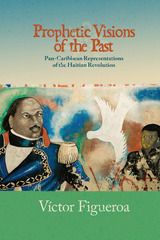 In Prophetic Visions of the Past: Pan-Caribbean Representations of the Haitian Revolution, Víctor Figueroa examines how the Haitian Revolution has been represented in twentieth-century literary works from across the Caribbean. Building on the scholarship of key thinkers of the Latin American “decolonial turn” such as Enrique Dussel, Aníbal Quijano, Walter Mignolo, and Nelson Maldonado-Torres, Figueroa argues that examining how Haiti’s neighbors tell the story of the Revolution illuminates its role as a fundamental turning point in both the development and radical questioning of the modern/colonial world system.