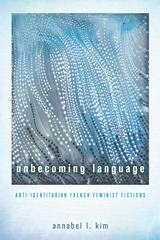 In Unbecoming Language, Annabel L. Kim examines a corpus of French writing against difference. Inaugurated by Nathalie Sarraute and sustained in the work of Monique Wittig and Anne Garréta, this corpus highlights three generations of the twentieth and recent twenty-first centuries and the direct chain of influence between them. Kim considers these writers, and the story of literature’s political potential, as a way of rereading and reinterpreting each writer’s individual corpus—rearticulating the strain of anti-difference feminist thought that has been largely forgotten in our (Anglo-American) histories of French feminisms.

Kim’s close readings ultimately enliven the current conversation in French studies by serving as a provocation to return to reading literary texts deeply and closely, without subordinating literature to a pre-existing ideological framework—to let literature speak, to let it theorize. Tracking the influence of these writers on each other, Kim provides a new, original French feminist poetics and demonstrates that Sarraute, Wittig, and Garréta’s work allows for a hollowing out of difference from within, allowing writers and readers to unbecome—to break free of identity and exist as subjectivities without subjecthood. In looking at these writers together, Kim provides a defense of literature as liberatory— capable of effecting personal and political change—and gives readers an experience of literature’s revolutionary possibilities.
AUTHOR BIOGRAPHY
Annabel L. Kim is Assistant Professor of French at Harvard University.
TABLE OF CONTENTS


Acknowledgments vii
INTRODUCTION 1
CHAPTER 1 Sarraute’s Indeterminacy: A Universe Without Contours 36
CHAPTER 2 Inside Wittig’s Chantier: To Build a Trojan Horse 79
CHAPTER 3 Garréta: No Subject Here 125
CHAPTER 4 Toward a Poetics of Unbecoming; or, Language Has a Body 165
CONCLUSION Unbecoming Language 234
Bibliography 241
Index 251